while I’ve been “slacking” (Trust me i’d rather be updating the website, than having to deal with a sick 3-month old.) The Joe Blog the Leaky Suit Brigade, has been reporting about the discovery of confirmed for release Jurassic Park G.I.Joes, them being found at retail, and even new ones revealed.  I encourage you to check out what’s released already, and what’s upcoming.

You may recall i have been posting a lot about them, their potential hope for release, their closing prices on ebay, and pics. It’s a good time to point that I while I don’t have a category on the menu at the left for JP, you can always track or read all articles on the site by the tags as well. For example the Jurassic Park tag has all the articles in an easy to read set.

Beyond the Leaky Suit Brigade, JP Toys has also posted several images one i’ve which i’ve mirrored below. 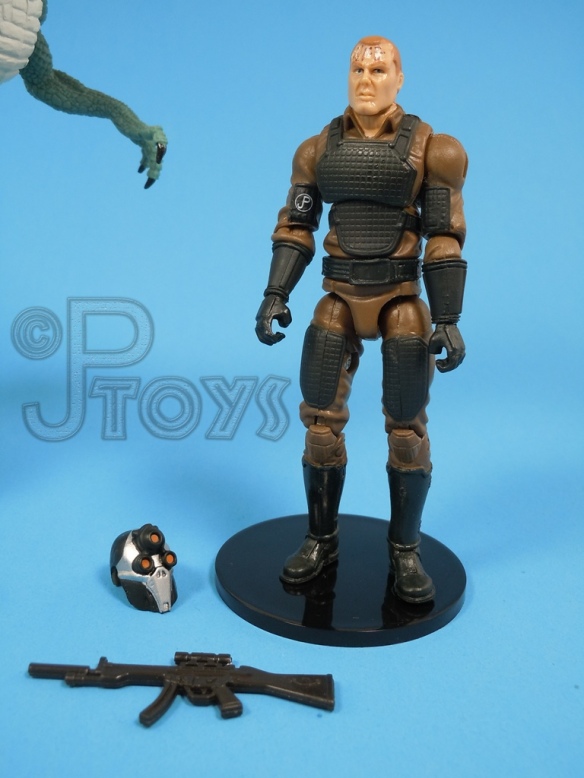 Look at that helmet! it really reminds me of Sigma Six Firefly, that’s a new head too (Crimson Chin/Jay Leno is that you?)

Check out both sites, although I have to warn you I saw the above picture via twitter,  and not JP Toys itself, it appears this particular image is in the message board and you have to sign up to see it, but other images are on the front page.

It appears the Joes are coming in  the $30.00 battle packs with one good sized dinosaur. 2 are coming out now with some folks already finding them, and 2 are upcoming.  One of the current ones is named Ash Skullstriker, I’d love to know the name of the other if anyone finds one and wants to let us know.  These are TRU exclusives, so happy hunting!

CLICK HERE to join the discussion in progress on our forums.

A new auction is up for a new canceled JP/G.I.Joe figure, we have talked about them before here on Toy Nation. Here is hoping he becomes common.  This new figure has the head of Big Bad Toy Store exclusive Burnout and the body of a resolute cobra trooper in green. IMO the head is too big for the body, but that body would make a nice base for a Jungle Viper.  The Last Jp figure on ebay went for over $300.00, so for those of you bidding, sorry for spreading the word and potential competition ! You can see them on ebay here, or here and  Pics are mirrored below.  As always, hit up our forums for discussion.   -revsears

Giving away a Kickstarter exclusive steel brigade head in both the legion of Valaverse and reasonable G.I.Joe groups on Facebook. #valaverse #steelbrigade #actionforce
Those vibrant wings really draw the eye to wasp raider. #valaverse #actionforce