Just in time for Halloween The Drawn Word has a new Mike Allred’s G-Men from Hell Retro 1960s trading cards Kickstarter project launching to produce a set of cards based on the Mike (Madman) Allredcharacters, complete with a preview card #0 for the upcoming Madman 25! commemorative card set, which will document “Madman’s 25-year career in just as many cards—but with an unrevealed spin.

“We had a few slots to fill in our print run,” Irving reveals. “And I wanted to produce a retro set that begged the question ‘What if there were a 1960s G-Men film?’ I gathered local film friends of mine and we staged ‘movie stills’ from Hell for Monsters, an original story I came up with for this project. Only three of the cards were printed and this gives us a chance to make the ‘full’ set.” 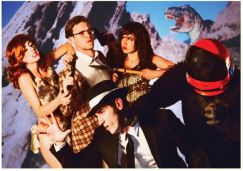 The 13-card set jumps around in numbering and, when read in total, forms the basis of a story that pits the early Allred characters Dean Crept and Mike Mattress, undead gumshoes, against everything from dinosaurs, monsters, she-devils, cavegirls, and astroapes. Along for the ride is a younger version of Dr. Flem—because time travel also plays a part in the story. Assisting Irving is director Eric Miller (Flem), actor Dietrich Teschner (Mattress), and Richmond-based burlesque performers Zhora Nova and Em Claire

“Christopher Irving was one of the first folks to ever enthusiastically support my work, and has since become a great friend,” Michael Allred (Madman, Silver Surfer, iZombie) says. “Brimming with talent and imagination, it’s been great fun to let him cut loose on this project with some of my earliest creations!”

Be sure to hop online and check out the G-Men from Hell Kickstarter project, it runs from Halloween day until November 21st with a goal of $666. Madman 25! launches on April 1st for a May to June release.